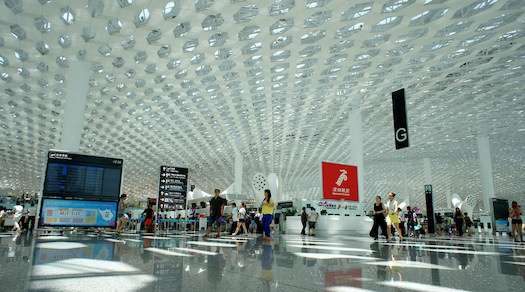 Recently, I travelled to china to meet with one of our vendors. As soon as I set foot in the country, I was impressed with a variety of things that I saw.  The Shenzhen airport was big and modern. The familiar Starbucks logo and store were there—so familiar despite the strange surroundings.

Thirty years ago, Shenzhen was a fishing village. Now, it is the third largest city in China, smaller only than Shanghai and Beijing. Everything I encountered met or exceeded my high American standards: the immigration process, the customs process, and the airport navigation tools. As I spent more time in the city, I saw that, like many parts of the United States, construction had become a way of life for the people of Shenzhen.

Actually, it brought to mind the Big Dig (as the project that rerouted Boston’s Interstate 93 into the Thomas P. O’Neill Jr. Tunnel was known) that wreaked havoc for more than ten years in Boston. Everywhere I went, construction was not just obvious, but also frustrating and annoying.  We all groused about it. The Chinese, it seemed to me, made it a way of life and let the construction continue like an alternative track while real life goes on as normal. It didn’t seem to disrupt traffic or daily life the way it does in the United States. Construction seems to happen in one lane at a quick pace even as life continues in another.

Perhaps this is the attitude and approach that has made China a global manufacturing presence.  China is credited with the largest construction project in the world, to which the latest feed is the $900 billion Silk Road Project.

Anyway, coming back to the Chinese construction machine, I first experienced on a trip in 2012. I travelled there as part of an international residency program during my MBA program. When we got there, our professor was pointing out buildings that had not been there the last time he had been there. His point at the time was that, although he came to China every other year, there were always mammoth new skyscrapers. He wondered: How do the Chinese manage to build such tall buildings so fast?

Other countries haven’t managed that level of growth. My home country, India, hasn’t grown nearly so much despite a similar culture and sharing an understanding of English. Like China, India has a variety of cultures, languages, cuisines, and clothing styles if you travel a few hundred kilometers in any direction. It could be compared to a mini-Europe

America, meanwhile, has the strength of unity. We also have a dedication to doing the right thing. Let me offer one historical example: In the movie the Darkest Hour, Winston Churchill called President Franklin Delano Roosevelt, who had made it clear that America would not enter the world.  However, he came to realize that sitting silently when the entire human race in the western hemisphere was getting decimated by the megalomaniac Hitler was not the right thing to do. We entered the war—and brought all our resources to bear to win it. America is great because we have an attitude that we should do the right thing even at great cost.

Our technology history shows it. In America, a first generation, abandoned at birth, Syrian American built something called a personal computer that turned whole world upside. In America, Elon Musk is building infrastructure to make human beings an intergalactic species. As a country, we break the status quo, push the limits, discover new frontiers, and build new things with great passion. We have the advantage of appreciating diversity and new ideas.  If we stick to these principals, we will continue to be great.

The Chinese indeed have their strengths. They are catching up fast, and certainly we see them in our rear-view mirror. Let that, though, be nothing more than encouragement to continue the race. Rather than living to beat the competition, America should focus on doing what we do best: making the impossible happen, exploring new worlds, and building things that amaze.

What do you think makes America great? Are you worried about Chinese manufacturing? Let us know in the comments section below.