This next best practice is about the warehouse zone picking process. The way this works is if your picking involves going to multiple areas, multiple isles of bin locations, and you are picking from different bin locations. This process is about eliminating all the unnecessary walking, and of course we all know the more you pick, the more you can ship, the more you ship, the more you invoice, the more you can get paid. This results in more revenue for the company, more revenue for the distribution center and everyone is happy. If you can eliminate the time that is spent by people on walking and instead have them pick all the time then that becomes efficient. If you have one long isle or multiple isles you could divide those isles into multiple zones. So what would happen is and typically this works well with a MHE (material handling equipment) wherein the box comes to the zone and the person stays in the zone all the time. 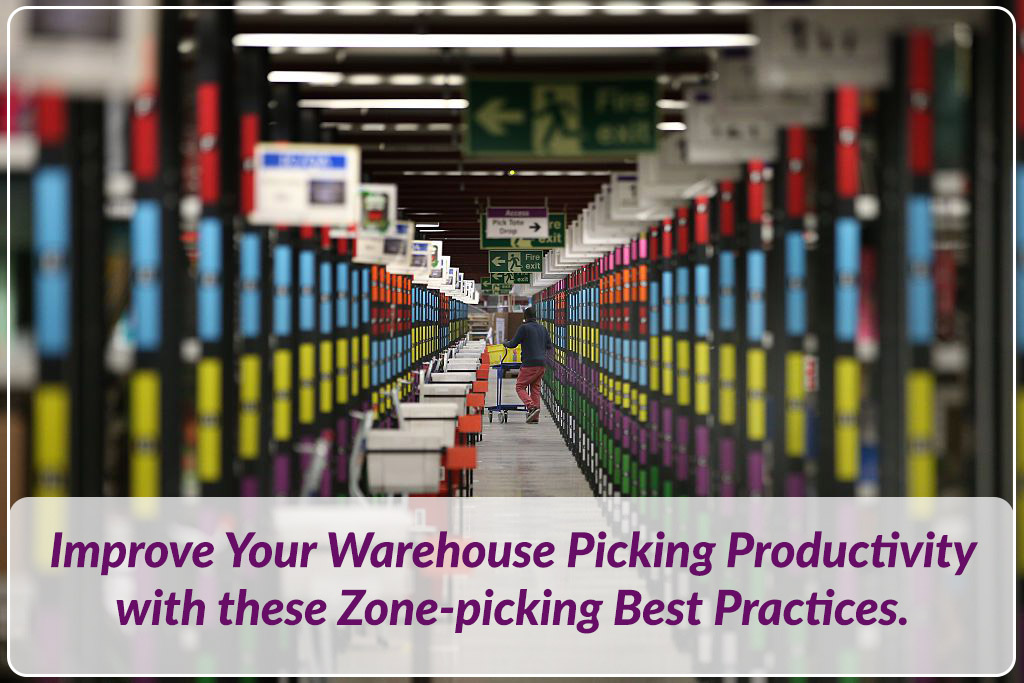 Sometimes it could be some kind of a bulk picking where they are picking for the tote and scans the tote and then goes picks. When they are picking they are scanning the location as well because the inventory in that location has to be decremented and then the inventory going on to the cart and tote has to be incremented. They are doing this all day just standing in that location which means they are not spending time, wasting time walking so that adds to their efficiency.

They are not spending time on moving the product as nowadays it is done by the material handling equipment. The robots that are now being implemented to move the cartons. The beauty of the robots is that it is configurable. Now imagine that you had one long material handling equipment mean with a roller and long rails. The rollers move these boxes, and they come to the zone and you are in that zone. Then there are pickers in the other zone named zone 1, zone 2, zone 3, zone 4 and zone 5. When it comes to your zone to drop off the box and if you fulfill the order, then it goes to the next zone. The next person fulfills the order like that they are doing it that works great. But imagine your business changed and you have to change this layout which means you have to completely lift these long rail of rollers and then put something else that’s where the robot comes. It’s easy to program the robots, change the configuration of the robots, so the robots can instead of going in a particular path it can go in some other optimized path.

It’s all very flexible and that’s the beauty of the robots. It’s a zone picking instead of it’s coming through the conveyor the long rails with rollers it comes with the robots. As the operator is not walking and just need to perform picking and dropping off the product to the carton the efficiency gets increased. So that’s the fundamental concept of zone picking and especially if your DC is very large and there is one pick that is all the way on the other corner of the DC then you want to think about zone picking process. We don’t have control over how the order arrived for picking so that’s something to think about zone picking. It might work or might not work and typically where I have seen were lot of successes are not from small SKUs  and big SKUs.

It is more efficient on medium size SKUs that are too heavy for the people to handle. It with an office retailer, that’s where it worked well. There were some kind of automation where the cartons where diverted to the zone only if there are picks in that zone. If there are no picks in that zone carton would just got to one, three, five and, if there are picks then it will go into the zone so that also save some time. It was planned like that because there is no point in diverting a carton if there is no picks, so the person does not have to scan and find if there are no picks. It adds to the efficiency, and that’s something to think about zone picking. If it is suitable for your facility, and justifies your investment in the material handling equipment and all that taking into account, all the walking that your people are doing and the labor cost associated with it then zone picking can be implemented without any second thoughts. Please share your comments in the section below.